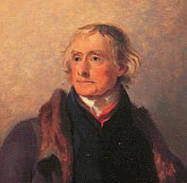 Shadwell Chapter NSDAR was organized February 5, 1925, in Charlottesville, VA. The original Chapter name was General Wilson Cary Nicholas Chapter, named for a soldier of the American Revolution and close friend of Thomas Jefferson. Later General Nicholas became a Magistrate of the county, member of the Legislature, Governor of Virginia, and United States Senator. In 1927 permission was granted by the National Society to change the Chapter name to Shadwell, the birthplace of Thomas Jefferson.

Peter Jefferson, Thomas Jefferson’s father, owned a thousand-acre tract in what is now Albemarle County, Virginia. He acquired an additional 100 acres of adjoining land from William Randolph for “a consideration of Henry Weatherbourne’s biggest bowl of arrack punch.” A house was built on the site in 1737, which was named Shadwell after the parish in London where Peter Jefferson’s wife was born. Thomas Jefferson, a son of Peter Jefferson and Jane Randolph Jefferson, was born at Shadwell on April 13, 1743. He lived there between 1743-1745 and 1752-1770 and moved to Monticello after the house was destroyed by fire in 1770.

Shadwell Chapter NSDAR promotes the objectives of the National Society Daughters of the American Revolution: History, Education, and Patriotism. Since 1925 the Chapter has been recognized for community service and participation in the programs of the National Society. Activities include participation in the July 4th Naturalization Ceremony at Monticello and the Flag Day Celebration and Visitation at Hunter Holmes McGuire Veterans’ Administration Medical Center. American History medals and Youth Citizenship medals are awarded to outstanding students at eleven local elementary schools,  DAR Good Citizen Medals are awarded to two outstanding high school seniors, and an ROTC Medal is awarded to an outstanding Army cadet at the University of Virginia. An American History Essay Contest is sponsored and is open to students in public, private, parochial schools, and home study programs. Our Chapter will soon celebrate its 100 year anniversary.

The DAR insignia is the property of, and is copyrighted by, the National Society Daughters of the American Revolution.